My postcards will appear at an event called Xenophobia 2016 organised by MigSzol Hungary www.migszol.com on 29th April 2016 .

There will be discussions on how to raise our voices against scapegoating and the xenophobic propaganda, as well as, the new(est) asylum legislation, the abolition of the integration support and also about structural homelessness in Hungary which affects more and more refugees too.

As part of the event, my postcards will be distributed among participants to express thoughts, ideas and critique on the discussed topics, and later sent to members of the Hungarian Parliament. All the messages will be collected and sent together as a collective statement against the status quo.

Here is the Facebook event page for more information in English and Hungarian:

Come and join us!

Dimensions and materials:  Black and white photographs, coloured and altered in Photoshop, printed into traditional postcard format (105×148 mm) to be taken away by visitors, 8 sets, 2015

In September 2015, I spent several days at Keleti Station, Budapest, with the Syrian and Afghan refugees and their children.

On one occasion, I took my camera with me and took some pictures of the places they gathered, rather to say “forced to hang out”, so-called “Transit-Zones”. Inhumane conditions, 3 showers for hundreds of migrants, no potable water for them for weeks. The government did not provide any food or accommodation. Apart from some volunteers and some organizations, no official organizations have been looking after these people. They had to sleep on pavements, and their kids played on the underground corridors. You could see it in their eyes, the traumas of all the horrors they’d left behind and the exhaustion from running away and traveling so far. All this in the hopes of a better life…

I converted my black and white photographs into vintage-like postcards, with the line, “Wish you were here!” to address the notions of presence and absence on several levels: Hungary as a transit zone, migration from Hungary, family members in different countries, feelings of belonging and abandonment, a desire for interaction.

The message: “Wish you were here!” calls for attention. With this line, I’m suggesting that the migrants and refugees are absent on the time of display. These cards, in a sense, call for presence in the times of absence. 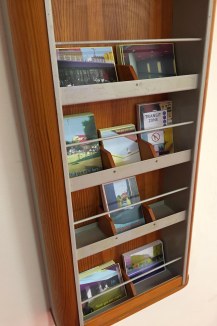